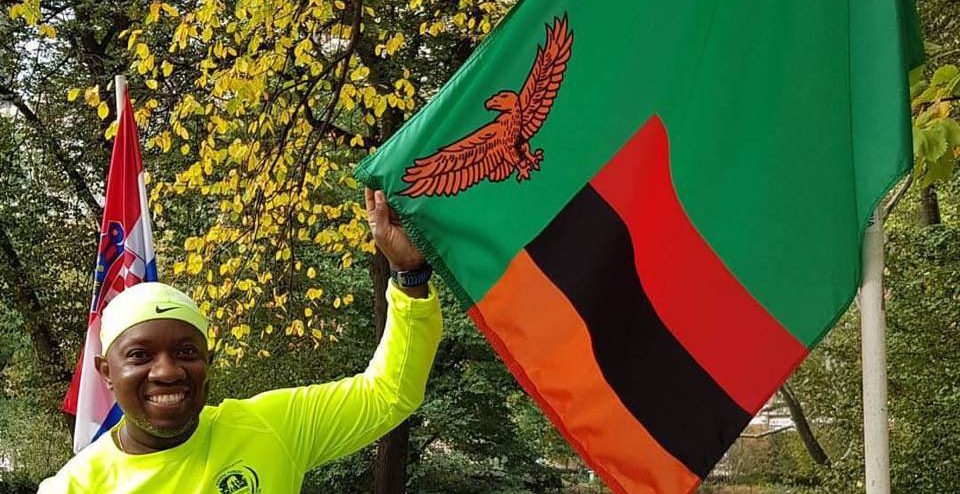 Kafula Mwiche is known to most of us in the LSA Group of Companies as our Group Legal Counsel. But away from his official role, he is a keen fitness advocate which he has taken up with religious passion. He says it’s cheaper to keep fit and stay healthy than to spend money and time seeking medical attention. Patience Chisanga caught up with him in this interview.

Q: What made you take up running?

A: I can’t really point to a particular reason I took up running. All I recall is that sometime in 2014 my wife and I decided to start some running as a variation to the Gym and Bootcamp workouts we had been accustomed to. I began seriously working out in 2002 when I went to pursue my Master’s Degree in the UK. In that year I managed to get a Chevening Scholarship to pursue postgraduate studies from the Commonwealth and Foreign Office of the UK and one of the conditions was a clean bill of health. Whilst undertaking the medicals I was advised that my blood pressure was too high and I was overweight. My doctor strongly advised that I use exercise to improve my health. That was the beginning of my fitness journey. I began to run and discovered that I actually loved the challenge of each run. I have never looked back since then.

Q: Most people make a decision to keep fit, and along the way quit. What has kept you going as a runner?

A: I think for one to keep working out and doing such activities one has to make a decision that it is a life style change.  I have never looked back since I began working out and running in particular. It’s a lifestyle and it is something I have to do every day just like any other activity. As I eat and go for work each day is the same thing when it comes to my fitness regime. I literally work out every day and when not training for a race, I run three times a week. When I’m in training I run five times a week and that’s what is called a moderate training programme.

Q: What does a day in your life look like especially when you are preparing for a Marathon?

A: Training for a Marathon is tough, it takes a lot of time, effort and sacrifice. I normally  have a 16 weeks training programme for a Marathon and the programme will depend on the objectives. I either run to race or run as part of training for a bigger event. My typical day begins at 02:00 AM, I wake up to take my first hydration which is 500ml of water. I then wake up at 04:00 hours, spend 10-15 minutes in the presence of the Most High, reading the scriptures and meditating on the word. I then take a quick shower and dress up for the run on the menu. I then leave the house to either join up with my running club or take a solo run. My training is in accordance with the programme my coach gives me. I have a personal running coach out of South Africa, Chris Bruwer. He sends me a monthly training programme which I follow. Each running day has a different running activity; there are days for an easy run, days for speed work and days for long slow distance. A typical marathon training programme will ensure that I cover not less than 45 km in a week. I combine my running with strength training and other aerobic activities. So on some days after my run I take my spinning classes as I have found myself being a spinning instructor at the Life Style Gym at East Park Mall. My spinning classes are on Monday; Wednesday and Friday at 06:00 AM. After my run or workout I get to the office and earn my keep. Food is an important aspect of training so in a day I ensure that I have six meals which are properly balanced. I normally retire at 21:00 hrs so that I have my 7 hours of sleep.

Q: How do you balance work and fitness?

A: The Most High has given us 24 hours in a day and this is enough time for one to undertake all activities that one has to do. I’m an early riser so I’m able to be in the office in good time after my training. So I carry my work clothes to the Gym and shower and change after my workout. Luckily, we have a gym at the office with showers so at times I get to the office at 05:00 AM and go for my run and then take a shower at the office. In an event I have an evening workout I normally go to the gym after hours then return to the office when it’s nice and quiet and put in a good hour’s work and I find this very refreshing. At times I even work out over lunch; I call it the “Lunchtime Squeeze,” which energises you for the afternoon. In a nutshell work is no excuse one can’t find time.

Q: What have been your most exciting Marathons thus far and why?

A: I have so far participated in three Marathons, the Sanlam Cape Town Marathon in September 2016, the City of Manchester Marathon in March 2017 and the TC’s New York Marathon in November 2017. The top of the pick is the New York City Marathon; it was an awesome experience, a life changing Marathon. It is arguably the biggest in the world with over 50,000 participants from 145 ccountries. The cream on the cake for me was that I was the official flag carrier for Zambia which was such an honour to represent my ccountry. The race is in the best ccity in the world so it’s a must -do marathon and I’m glad it’s off my bucket list, but I can surely do it over and over.

A: I was one of the lucky persons to be successful in the New York City Marathon Ballot. Over 500,000 entries were received and I was accepted hence the reason for participating. The New York City Marathon is one of the Abott Six Major Marathons in the world. The others are Chicago; London; Tokyo; Berlin and Boston.  Every runner yearns to run the six majors so for me this was a first of the six, five more to go. I am so blessed in that I have been accepted in the 2018 Chicago Marathon so by the end of 2018 I will only remain with four out of the six majors.

Q: Your participation at the New York City Marathon in 2017 benefited the Zambia Cancer Society, tell us about the initiative and why you chose to fundraise for it?

A: Marathons the world- over are used to raise funds for charities. In fact, one way of entering a marathon is to agree to fund-raise for a specific charity. When I was accepted to run the New York City Marathon I decided to offer the opportunity to the Zambia Cancer Society (ZCS) to use my run to fund-raise. They have a Zambia Active campaign which is aimed at encouraging Zambians to be physically active as a way of mitigating the onset of cancer. ZCS undertakes many other activities and is dependent on well-wishers for funding. ZCS managed to raise K10, 000.00 from my participation in the NY Marathon, funds they have applied to their activities.

A: The New York City Marathon route takes you through the five Boroughs of New York NY. The race begins in Staten Island, then moves into Brooklyn; then into Queens; into the Bronx and then into Manhattan and ends in central Park. It takes a lot of organisation to get over 50,000 participants to the starting line from all over New York and the surrounding areas. The race is a logistical nightmare due to security and the city is literally locked down. On race day I got up at 04:00 AM to ensure that I was at the bus pick up point at 05:30 which was my scheduled departure time. I got to the pickup point on time and waded through the crowd and took the two -hour bus ride to the Starting Village.  The temperature was abut 1c so it was freezing but we had been advised to wear warm clothing as athletes have to wait for over two hours in the Start Village. In the Village, I had my breakfast which was a beagle and banana which I had bought in the Hotel Cafeteria. At 10:30 my corral was moved to the starting line and we were underway at exactly 10:45. I had trained and planned for this race for weeks so I stuck to my game plan and paced myself accordingly; when I got to the 5km mark I was feeling good and pushed it up a bit. I got to the half way point a minute ahead of schedule and then decided I to go for it and post my Personal Best time. The run through the five boroughs was so exciting as each borough has its own culture and we found different musical groups and supporters cheering us on. The race ends in Central Park and the approach is out of this world. I competed the race in 4:23:20 which is my PB.

Q: What was your best overall memory from the New York City Marathon, before during or after, and how would you       sum it up for someone who hasn’t been there?

A: New York the City that never sleeps is breath- taking and running in this City is arguably one of my most exciting experiences in my life. The City was a buzz before and after the race. A few days before the race I met many runners from all over the world warning up in Central Park. The opening ceremony was as grand as it gets and it was so much fun. The most enjoyable moment for me was meeting my Hero Meb Keflezighi winner of the New York Marathon and Boston he was retiring at the 2017 NY Marathon so it was a great honour to meet him in flesh. The Zambian community in New York mobilized and cheered us along the way and waited for us at the finish line which was heart-warming.

A: My advice to people is that one’s health is the only thing in one’s control all else has other variables and therefore not in one’s control. It is cheaper to keep fit and stay healthy than to spend money and time seeking medical attention. In my years of working out and running I have been blessed and never suffered any serious ailment, so I would strongly encourage people to work out. It is also a networking opportunity as you meet people from all walks of life in the gym and if you decide to take up running at the various races. I have found working out and running very beneficial to my family life as my wife and I are both into these activities so we spend a lot of quality time together. Each run is a challenge and overcoming it gives you the desire and ability to overcome any challenge. If you can run a Marathon there is no race in this life that can defeat you.